The Paris Agreement, named after the city where it was negotiated, is the international treaty by which almost every nation on earth has agreed to limit emissions. Will the U.S. remain a participant in the biggest international accord ever created to counter the climate crisis?

The U.S. is responsible for about 15% of global greenhouse gas emissions, the primary cause of global warming.

President Obama formally entered the U.S. into the Paris Agreement in September 2016, during his closing months in office. Specifically, he committed the U.S. to reduce its emissions by at least -26% below its 2005 levels by 2025.

Yet less than a year later in June 2017, President Trump reversed course and announced the U.S. would pull out.

Due to provisions in the Agreement specifying details for any participants potentially leaving, the U.S. couldn’t actually withdraw until November 2020at the earliest. This means we are still bound to the treaty for Trump’s first term, no matter what.

The Climate Action Now Act is House Democrats’ legislation to require the U.S. remain in the Paris Agreement beyond 2020.

Specifically, it would prevent the administration from using any federal dollars to withdraw from the deal. Functionally, that’s the same thing as forcing the U.S. to remain in permanently.

Supporters argue the bill isn’t just better for the environment, but also for energy and the economy.

“A year and a half ago, I boarded up my home, packed my belongings and fled with my family as that monster Hurricane Irma loomed off the coast of Florida,” Rep. Castor said in the Weekly Democratic Address. “We were petrified of a devastating storm surge from the Gulf of Mexico and Tampa Bay. We were lucky because we had time to get out of the way. But for too many Americans, the climate crisis is inescapable.”

“The bottom line is that the climate crisis is costing us,” Rep. Castor continued. “It’s increasing the cost of our health care, our flood and fire insurance, and it’s making costly weather disasters even worse. So we need to cut carbon pollution for the people in our communities, and because we need to do it to create incredible economic opportunities.”

Opponents counter that the Paris Agreement is economically costly and burdens the U.S. to international norms instead of self-directing its own energy future — even if you support the environmental goals.

“Not only does this deal subject our citizens to harsh economic restrictions, it fails to live up to our environmental ideals,” President Trump said in a speech announcing the withdrawal. “As someone who cares deeply about the environment, which I do, I cannot in good conscience support a deal that punishes the United States — which is what it does — the world’s leader in environmental protection, while imposing no meaningful obligations on the world’s leading polluters.”

“For example, under the agreement, China will be able to increase these emissions by a staggering number of years — 13. They can do whatever they want for 13 years. Not us,” Trump said. “India makes its participation contingent on receiving billions and billions and billions of dollars in foreign aid from developed countries. There are many other examples. But the bottom line is that the Paris Accord is very unfair, at the highest level, to the United States.

Vote and odds of passage

The bill passed the House on May 2 by a 231–190 vote. Democrats were unanimously in support, while Republicans almost entirely opposed except three: Reps. Vern Buchanan (R-FL16), Brian Fitzpatrick (R-PA1), and Elise Stefanik (R-NY21).

It will almost certainly fail in the Senate, if it receives a vote at all. “This futile gesture to handcuff the U.S. economy through the ill-fated Paris deal will go nowhere here in the Senate,” Senate Majority Leader Mitch McConnell said on the Senate floor. “We’re in the business of actually helping middle-class families, not inventing new obstacles to throw in their paths.” 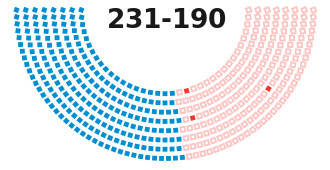