Would a House-passed bill lower costs and allow flexibility, or potentially exclude Americans with preexisting conditions?

Since 2010’s Affordable Care Act, popularly called Obamacare, health insurance companies can no longer refuse a customer healthcare because of a preexisting condition. Pew Research Center found that even 63% of Republicans support that provision.

A portion of the law known as Section 1332 allowed states to experiment with health care requirements and programs within their borders. But these state variations needed to receive approval through waivers from the federal government.

The Obama Administration released guidance in 2015, through the Department of Health and Human Services, about which types of state variations were likely (and not likely) to gain federal approval. However, many criticized the guidance for being too rigid.

Under the Trump Administration, far more lenient new guidance was released in October 2018. It announced that the administration would permit a far greater level of state variation and experimentation on healthcare. Some fear this could allow for more so-called “junk plans,” including short-term health plans or association health plans, which are exempt from Obamacare rules and could exclude coverage for preexisting conditions.

The Protecting Americans with Preexisting Conditions Act would formally repeal the Trump Administration’s October guidance, halting the state-led expansion of health insurance plans which could discriminate or exclude coverage based on preexisting conditions.

Supporters argue the legislation safeguards a person’s health care, even if they have a medical ailment which they were born with or cannot control.

“We cannot go back to a time when Americans with preexisting conditions can be charged more or denied care,” lead House sponsor Rep. Kuster said in a press release. “Our legislation provides much-needed pushback against the Trump Administration’s repeated and ongoing sabotage of the Affordable Care Act and our healthcare system.”

“Junk plans will increase health care costs for millions of consumers while weakening protections for individuals with pre-existing conditions,” Senate lead sponsor Sen. Warner said in a press release. “The Trump Administration should stop trying to undermine the success of the Affordable Care Act, and instead work with Congress on targeted, bipartisan fixes that will lower health care costs and expand access to comprehensive, affordable health care coverage.”

Opponents counter that expanding the availability of short-term and association health care plans would allow consumers more options and provide lower costs. (Plans which have to cover less generally cost less, too.)

“The Patient Protection and Affordable Care Act, however, has severely limited the choice of healthcare options available to many Americans and has produced large premium increases in many State individual markets for health insurance,” the White House wrote in a 2017 executive orderannouncing a partial expansion of such short-term and association health care plans. “The average exchange premium in the 39 states that are using HealthCare.gov in 2017 is more than double the average overall individual market premium recorded in 2013.”

“My Administration will also continue to focus on promoting competition in healthcare markets and limiting excessive consolidation throughout the healthcare system,” the executive order continued. “To the extent consistent with law, government rules and guidelines affecting the United States healthcare system should: expand the availability of and access to alternatives to expensive, mandate-laden [Obamacare] insurance, including association health plans, short-term / limited-duration insurance, and health reimbursement arrangements.”

The Republican-controlled Senate seems likely to vote it down, if Senate Majority Leader Mitch McConnell (R-KY) even allows it to come up for a vote in the chamber at all. Then again, McConnell has also said he’s in favor of keeping protections for preexisting conditions. 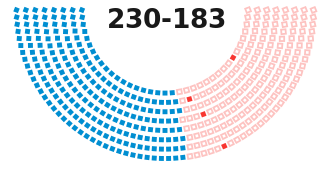