Should the 1964 law which outlawed race discrimination be updated to include LGBT individuals too?

Great strides have been made this decade for legal equality based on sexual orientation or gender identity, including permitting openly gay troops in the military and the Supreme Court legalizing same-sex marriage nationwide. However, both those gains came at the federal level.

28 states still allow discrimination based on sexual orientation or gender identity on the state level, including in such sectors as employment and housing.

States used to similarly allow other forms of discrimination, before the Civil Rights Act of 1964 banned any discrimination or segregation on the basis of four categories: race, color, religion, or national origin.

The Equality Act would add sexual orientation and gender identity to the Civil Rights Act of 1964, enshrining such nondiscrimination protections under federal law.

Supporters argue the legislation would extend the federal protections against racial discrimination, which the vast majority across the political spectrum now agree was the correct decision, to another class of minorities who may need it.

“To dismantle the discrimination undermining our democracy, we must ensure that all Americans, regardless of sexual orientation or gender identity, are treated equally under the law,” lead sponsor Rep. Cicilline and Speaker Nancy Pelosi wrote in an op-ed for The Advocate, “not just in the workplace, but in education, housing, credit, jury service and public accommodations as well.”

“50 percent of the national LGBTQ community still live in states that fail to provide clear legal protections to their LGBTQ citizens,” Reps. Cicilline and Pelosi continued. “While these states try to stand against the tide of progress, the Equality Act will guarantee a nationwide standard to ensure that no American is ever forced to lose their job or home or live in fear simply because of who they are or whom they love.”

“Ultimately, parents’ rights to educate their own children and seek the best medical treatment for them would be undermined,” a letter by the Conservative Action Project reads. “In Ohio, a judge terminated a couple’s custody of their 17-year daughter when they disagreed with the recommendations of a gender clinic and county agency that she take testosterone injections.”

“Medical professionals will be vulnerable to lawsuits if they decline to perform hormonal or medical procedures on patients who identify as transgender,” the letter continues. “Under the Equality Act, individuals and institutions could see increased lawsuits for failing to affirm same-sex marriage (in foster care and adoption), make single-sex private facilities co-ed, and use preferred pronouns for individuals who identify as transgender.”

The bill passed the Democratic-controlled House by a 236–173 vote, on May 17. All voting Democrats voted in favor, 228–0. Republicans overwhelmingly opposed, 8–173.

Odds of passage in the Republican-controlled Senate are slim. The Senate version has 46 cosponsors: 45 Democrats or Democratic-affiliated independents, plus Sen. Susan Collins (R-ME).

President Trump does not appear to have personally weighed in on the bill, although a senior administration official told the Washington Blade that Trump opposes it. However, back in 2000, Trump endorsed the idea.

“I like the idea of amending the 1964 Civil Rights Act to include a ban of discrimination based on sexual orientation,” Trump told The Advocate in a 2000 interview. “It would be simple. It would be straightforward. We don’t need to rewrite the laws currently on the books, although I do think we need to address hate-crimes legislation. But amending the Civil Rights Act would grant the same protection to gay people that we give to other Americans — it’s only fair.” 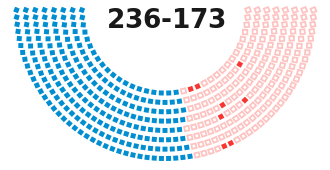