This was a vote to pass H.R. 748 (116th) in the House. This vote was taken under a House procedure called “suspension of the rules” which is typically used to pass non-controversial bills. Votes under suspension require a 2/3rds majority. A failed vote under suspension can be taken again.

With 369 cosponsors, it has the second-most cosponsors of any House bill in this Congress.

2010’s Affordable Care Act, more popularly called Obamacare, included a planned 40% tax provision on any employer-sponsored health insurance plan above $10,200 for an individual or $27,500 for a family. This became known by the nickname “the Cadillac tax,” after the Obama Administration sold it as a tax on only the most expensive companies’ health insurance plans. However, some studies suggested that as many as 82% of plans could face the tax, including middle-class employees like schoolteachers.

As a result, the proposal attracted widespread criticism on both sides of the aisle, with even most Democrats in opposition, although Democrats had reluctantly passed the provision anyway as part of the larger Obamacare law which they mostly supported in its totality. A bipartisan coalition in Congress had more than once repealed the Cadillac tax provision’s implementation. Currently, it’s not scheduled to go into effect until 2022.

Supporters argue the bill would keep costs down for most Americans on their health insurance, one of the most expensive -- and fastest increasing -- costs of life.

“The American people have made it clear that they want Congress to address the rising cost of health care,” Rep. Courtney said in a press release. “Out of pocket costs are unaffordable for growing numbers of families, even those who have insurance. If the 40% excise tax goes into effect, we know this affordability crisis will dramatically worsen. Actuarial experts have repeatedly warned that this tax will disproportionately and unfairly impact older workers, women, and working families in expensive geographic areas.”

“Eliminating this onerous tax on employees' health coverage will protect important benefits for workers and ensure that businesses and families get a fair deal,” Sen. Heinrich said in a separate press release. “I'm proud to… [lead] this bipartisan effort to ensure millions of middle-class families who rely on employer-based health care aren't unfairly penalized by this tax.”

Opponents counter that the Cadillac tax actually keeps health care costs down, by taxing employer-sponsored plans above a certain level and thus incentivizing containing costs below that threshold.

“The excise tax has a strong policy rationale: it will help slow health care cost growth. In fact, it’s one of the ACA’s most important cost-containment measures,” Senior Fellow Paul N. Van de Water wrote for the nonpartisan Center for Budget and Policy Priorities. “It will discourage employers and employees from buying unusually high-cost health coverage that promotes the excess use of health care.”

“And the Congressional Budget Office (CBO) has concluded it will ‘encourage the dissemination of less costly ways to deliver appropriate medical services,’” Van de Water continued. “In addition, reducing the growth of health insurance premiums will allow for larger wage increases.”

The bill attained 369 bipartisan cosponsors, 201 Democrats and 168 Republicans. That’s the second-most cosponsors of any House bill this year, behind only the Military Surviving Spouses Equity Act with 371.

It next goes to the Senate, where it has attracted 42 bipartisan cosponsors, a precisely even mix of 21 Democrats and 21 Republicans. 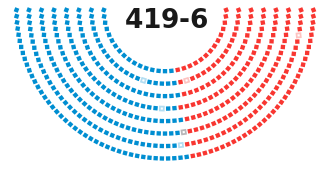