This was a vote to pass H.R. 693 in the House. This vote was taken under a House procedure called “suspension of the rules” which is typically used to pass non-controversial bills. Votes under suspension require a 2/3rds majority. A failed vote under suspension can be taken again.

Should politicians vote “aye” or “neigh”?

In the practice of “soring” horses, the animals’ steps are rendered painful to force higher steps, which is often rewarded during equine shows and competitions, such as dressage contests.

The Horse Protection Act of 1970 made the practice illegal. Yet some argue that the current penalties are too lenient — and that loopholes make it easier to evade detection.

Namely, rubbing inflaming chemicals like mustard oil or kerosene into the horses’ hooves to force the higher steps, then also applying ointments or other masking chemicals on top. Those help the horses pass inspection, but wear off by the time of actual competition.

The Prevent All Soring Tactics (PAST) Act would crack down on the practice of “soring” horses.

While the practice is already illegal under federal law, it would be raised from a misdemeanor to a felony, with the maximum fine raised from $3,000 to $5,000. It would also permanently bar anybody who violated the law three times from ever competing in a horse show or participating in an auction.

It would also remove the current loose “self-policing” policy for the industry, by mandating that the Agriculture Department to assign a licensed inspector for such a horse show or exhibition.

Supporters argue the legislation would help prevent animal cruelty and necessarily increase enforcement of an existing law that’s been flaunted too often, for too long.

“Horse soring still runs rampant even though laws have been on the books for decades banning this cruel practice,” Rep. Schrader said in a press release. “We gave them a chance to self-police but the practice continued. Our bill will strengthen and improve current regulations by improving USDA enforcement, increasing civil and criminal penalties, and banning incentives to sore horses. It’s time for Congress to act and put an end to this abusive practice.”

“I support the humane treatment of all animals and the responsible training of horses,” Sen. Crapo said in a separate press release. “I remain committed to ending the cruel practice of soring, and will continue to promote enforcement of current animal welfare laws.”

The country’s largest horse show for the Tennessee walking horses breed — the breed most frequently subjected to storing — is called the Celebration in Shelbyville, Tennessee. The state’s two U.S. senators have introduced a counter to the PAST Act called the Horse Protection Amendments Act.

It’s also cosponsored by the two senators from Kentucky and one from Mississippi. Part of the rationale for this alternate legislation is the claim that the PAST Act would end horse shows like Celebration.

“In baseball, if a player illegally uses steroids, you punish the player — you don’t shut down America’s pastime,” lead sponsor Sen. Lamar Alexander (R-TN) said in a press release. “We need to punish and stop any trainer, owner or rider who engages in the illegal practice of horse soring — not shut down a treasured and important tradition in both Tennessee and Kentucky.”

“This legislation is a proposal to end the contemptible, illegal practice of horse soring, while preserving the century-old Tennessee Walking Horse tradition,” Sen. Alexander continued. “It would do that by improving the consistency of inspections and regulations and enhancing accountability.”

Supporters of the PAST Act counter that it would hardly shut down horse shows, that that’s just fearmongering. They also warn that the Horse Protection Amendments Act would continue the practice of self-policing.

The House version first attracted 307 bipartisan cosponsors, among the most of any bills during this Congress: 225 Democrats and 82 Republicans.

The Senate version has attracted 51 bipartisan cosponsors: 43 Democrats, six Republicans, and two independents. Despite its death of GOP support, its lead sponsor is a Republican. 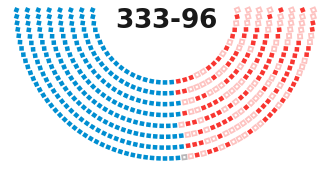