Should corporations be allowed to make customers sign contracts which waive their right to a lawsuit if anything goes awry?

At least tens of millions of Americans are locked into contracts mandating “forced arbitration,” meaning that any legal disputes couldn’t be handled in a traditional court. These are common in everything from cellphone contracts to employment contracts with a boss.

As a Vox article explained, such provisions make it “impossible for workers to sue their bosses in court for sexual harassment, racial discrimination, wage theft, and nearly anything else. Workers are less likely to win their cases in private arbitration, and when they do win, they tend to get much less money than they would in court.”

Supporters argue that the legislation helps consumers and ensures a right to access the legal system, which should be one of the linchpins of the American judicial culture.

“Forced arbitration agreements undermine our indelible Constitutional right to trial by jury, benefiting powerful businesses at the expense of American consumers and workers,” Rep. Johnson said in a press release. “Americans with few choices in the marketplace may unknowingly cede their rights when they enter contracts to buy a home or a cell phone, place a loved one in a nursing home, or start a new job. We must fight to defend our rights and re-empower consumers.”

“There is a lot of use of the phrase ‘rigged system’ these days,” Sen. Blumenthal said in the same press release. “One of the systems that is truly rigged against consumers, workers, and the American people is our current system of forced arbitration. Forced arbitration is unfair, unjust, and un-American. One of the fundamental principles of our American democracy is that everyone gets their day in court. Forced arbitration deprives Americans of that basic right. This kind of injustice has to end.”

Opponents counter that the legislation would raise expenses, waste, and overburden the existing judicial backlog by moving all claims into the court system.

“These blanket prohibitions will increase litigation, costs, and inefficiency, including by exposing the vast majority of businesses to even more unnecessary litigation,” the White House wrote in a veto threat. “As written, the FAIR Act disregards the benefits of resolving disputes through arbitration, including lower costs, faster resolution, and reduced burden on the judiciary.”

“By limiting contractual options, this bill would hurt businesses and the very consumers and employees it seeks to protect.”

It now goes to the Senate, where it has attracted 34 cosponsors, all Democrats or Democratic-affiliated independents. Odds of passage in the Republican-controlled Senate is low.

But could more Republicans support it?

Rep. Gaetz, the lone Republican cosponsor, argued in a committee hearing that the bill should earn more Republican support.

In this case, I’m convinced that big business’ overutilization of mandatory arbitration clauses impairs people’s access to something that is fundamentally American,” Rep. Gaetz continued. And that is having a judge and jury make a decision regarding your dispute.” 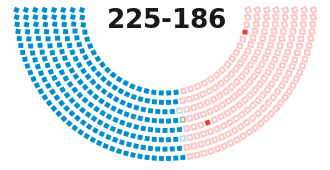