This was a vote to pass H.R. 428 in the House. This vote was taken under a House procedure called “suspension of the rules” which is typically used to pass non-controversial bills. Votes under suspension require a 2/3rds majority. A failed vote under suspension can be taken again.

When terrorists groups increasingly relying on Bitcoin and other similar virtual currencies, what should be done?

Bitcoin is the most famous among several prominent virtual currencies, a new type of digital payment system to arise in the 2010s. These offer several features that “traditional” money doesn’t have, such as being universal and thus negating the need for exchange rates between countries.

Yet the most prominent new feature is anonymity. The technological specifics of how they maintain anonymity are complex and use a new technology called blockchain. But the short version is Bitcoin and similar cryptocurrencies combine the anonymity of cash with the digital near-immediacy of credit cards, PayPal, Venmo, and the like.

Unfortunately, that makes it a potential gold mine for hate groups, assassins, and terrorists — because previously almost nobody wanted a charge to ISIS or the KKK on their MasterCard or Visa bill under their own name.

Enter the Homeland Security Assessment of Terrorists’ Use of Virtual Currencies Act.

The bill would require the Department of Homeland Security’s Office of Intelligence and Analysis to submit a report to Congress on terrorist groups’ use of virtual currencies and cryptocurrencies.

Technically this bill wouldn’t change any federal policies — but depending on the results and findings of the subsequent report by intelligence officials, it could potentially change federal policies.

Supporters argue that the legislation provides Congress with the knowledge and information necessary to maintain an edge over those who would use such new forms of financing to cause harm.

“There’s no question that threat of terrorism has evolved with the advent of new technology, and it’s critical that we stay ahead of these threats at all times,” Rep. Rice said in a press release. “Virtual currencies have exposed deep vulnerabilities in our counterterrorism efforts, creating new opportunities for terrorist organizations to finance their operations using the darkest corners of the Internet.”

“And right now, our government lacks a comprehensive strategy with which to respond,” Rep. Rice continued. “This bill will give law enforcement officials at all levels the 21st-century solutions, information and resources they need to counter this emerging threat.”

Opponents are concerned that the bill could be a seemingly-innocuous first step towards regulation or even possible banning of cryptocurrencies, which they view as heavy-handed government intrusion into economic activity.

While no member actually spoke in opposition during the House floor debate on the bill to offer their reasoning in their own words, Rep. Rice anticipated some defections from more libertarian-minded members.

“I encourage my colleagues in the Freedom Caucus, who care so much about national security and domestic security, to put their money where their mouths are, to put political pettiness aside,” Rep. Rice said on the House floor. “Let these votes go through as they are meant to, because these are bipartisan bills.”

The bill passed the House on January 29 by a 422–3 vote. Every Democrat voted in favor, as did almost every Republican except three libertarian-leaning congressmen: Reps. Justin Amash (R-MI3), Matt Gaetz (R-FL1), and Thomas Massie (R-KY4).

An identical version introduced by Rep. Rice in 2017 also passed the House on a voice vote, in which no record of individual members’ votes is recorded, a procedure used for relatively non-controversial bills. However, that version never received a vote in the Senate, so it’s difficult to say whether this new version will either. 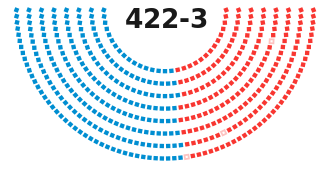