This was a vote to pass H.R. 737 (116th) in the House. This vote was taken under a House procedure called “suspension of the rules” which is typically used to pass non-controversial bills. Votes under suspension require a 2/3rds majority. A failed vote under suspension can be taken again.

Should shark fins, a delicacy in many food items, be banned?

One of the most valuable parts of a shark are its fins, which are often used for foods such as soups. About 73 million shark fins are sold per year, but this comes at a cost. After getting de-finned, the shark is often thrown back into the water to drown or bleed to death.

About 100 million sharks are killed annually, causing a number of shark species to be classified as vulnerable or endangered.

The Shark Fin Sales Elimination Act would ban the selling or buying of shark fins nationwide, with a fine of up to $100,000. (That’s the maximum fine for each offense in section 307 of the Magnuson Act, the law under which buying or selling shark fins would now be classified.)

The bill would still permit sharks to be caught for either subsistence purposes — for example some indigenous island populations who traditionally eat the animal — or for scientific research.

It was introduced in the House on January 23 as bill number H.R. 737, by Rep. Gregorio Sablan (D-MP0) of the Northern Mariana Islands.

Congress members from such U.S. territories are allowed to introduce and cosponsor legislation, but cannot cast binding votes for laws.

Supporters say the move is environmentally friendly, protects an endangered species, and ends a form of animal cruelty.

“Destroying millions of sharks simply for their fins is a wasteful practice that our indigenous Chamorro and Rafaluwasch cultures in the Marianas would never have allowed,” Rep. Sablan said in a press release. “We would have used as much of the shark as possible for food, tools, and other purposes.”

“The strong, bipartisan support for this legislation sends a clear message that we have to pay more attention to protecting the Earth’s oceans and the life within those oceans,” Rep. Sablan continued. “Banning the sale of shark fins is important, but just a small step towards giving the oceans the full respect they must have in federal law.”

Opponents counter that a shark fin ban could raise its value and would likely prove ineffective in practice.

“It’s expensive and difficult to enforce a ban. Making it illegal to serve shark’s fin will just push the product into the black market, raising its value even higher,” journalist Anna Ling Kaye wrote. “This has been an issue with a number of banned animal products, such as bear gall bladder and rhinoceros horn.”

“Also worrisome is the fact that… bans are often not effective. A telling example is Chicago’s 2006 attempt to ban foie gras (fattened goose liver), which resulted in an explosion of secret restaurants willing to serve the delicacy,” Kaye continued. “The ban was repealed within two years.”

The bill has attracted 215 bipartisan House cosponsors: 159 Democrats and 56 Republicans. It awaits a potential vote in the House Natural Resources Committee.

While that’s one of the highest cosponsors of any bill in this Congress, it’s actually several dozen less than the previous version introduced last Congress. That iteration attained 262 bipartisan House cosponsors: 177 Democrats and 85 Republicans. Yet that version failed to receive a vote. 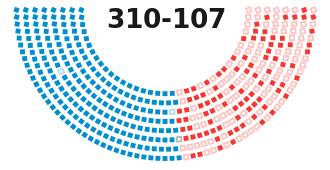