This was a vote to pass S. 1838 in the House. This vote was taken under a House procedure called “suspension of the rules” which is typically used to pass non-controversial bills. Votes under suspension require a 2/3rds majority. A failed vote under suspension can be taken again.

The legislation recently unanimously passed both a Senate and House committee.

Millions of Hong Kong citizens have peacefully protested and demonstrated since June, in marches and rallies that have grabbed the world’s attention. Held at first in response to a specific legislative bill proposing easier extraditions, the protests later metastasized into a more all-encompassing demand for governmental reforms.

Hong Kong is a special “administrative region,” formally part of the United Kingdom for about 150 years, but now part of China since a 1997 changeover. Although the changeover’s terms originally required China to pledge a generally hands-off approach to Hong Kong, certainly much more so than the heavy governmental control China applies to the rest of their nation, China has gradually ramped up control since 1997.

This summer’s proposed bill in Hong Kong about extraditions — which would make it easier for their citizens accused of a crime to be sent away, including most notably to mainland China where dissident citizens can be “disappeared” — was seen by many in Hong Kong as the last straw.

In the U.S., the United States-Hong Kong Policy Act of 1992 has governed U.S. policy towards the region. Essentially, it maintains all treaties and commitments to Hong Kong regardless of China’s official national agreement or participation. China, of course, sharply criticized the legislation at the time of its enactment.

It would also mandate the U.S. government identify any specific people involved in abductions of Hong Kong protesters or extraditions of Hong Kong citizens to mainland China, and freeze any of their U.S.-based assets and deny them physical entry into the U.S.

Lastly, it would clarify under federal law that nobody should be denied a visa to the U.S. on the basis of participating in Hong Kong protests.

Supporters argue the legislation stands on the side of human rights, democracy, and personal freedom over autocracy, government control, and authoritarianism.

“Democracy and freedom are under assault in Hong Kong, and it is critical for the Congress to reaffirm the United States’ commitment to Hong Kong’s autonomy, to the human rights guaranteed the people of Hong Kong, and to those peacefully protesting the Chinese government’s increasingly rough oversight of Hong Kong,” Rep. Smith said in a press release.

“It is in everyone’s interest that Hong Kong remain a free and prosperous bridge between China and the world,” Rep. Smith continued. “But if Beijing intends to force Hong Kong into becoming just another mainland Chinese city under authoritarian rule, we must reevaluate whether Hong Kong warrants the special status granted under U.S. law.”

“As over one million Hong Kongers take to the streets protesting amendments to the territory’s extradition law, the U.S. must send a strong message that we stand with those peacefully advocating for freedom and the rule of law and against Beijing’s growing interference in Hong Kong affairs,” Sen. Rubio said in the same press release.

“I am proud to re-introduce legislation that places the U.S. firmly on the side of human rights and democracy and against those who would erode the freedoms and autonomy guaranteed to the people of Hong Kong, freedoms that have made the city a prosperous global commercial hub governed by the rule of law.”

The legislation has virtually no American opponents, with political opposites Speaker Nancy Pelosi and Senate Majority Leader Mitch McConnell both supporting the legislation. However, as one might imagine, mainland China is particularly opposed to the legislation, claiming it violates international sovereignty and exposes hypocrisies of U.S. failures on human rights.

“Hong Kong is at a critical moment to reclaim law and order. However, it seems that some US lawmakers are trying to stand in the way,” China’s official Xinhua News Agency wrote.

“By smearing China to score cheap political gains as usual, these politicians are turning a blind eye to the undeniable facts that China has in the past 22 years unswervingly upheld its commitments to the Basic Law with an effective implementation of the ‘one country, two systems’ principle and a high degree of autonomy in Hong Kong,” the article continued.

“According to the Canadian Fraser Institute’s latest Human Freedom Index, Hong Kong ranks third in the world, far better than that of the United States, which ranks 17th.”

On September 25, the legislation passed unanimously in both the House Foreign Affairs Committee and Senate Foreign Relations Committee.

However, the tensions in Hong Kong issue has grown considerably in scope and publicity since then, especially since about June 2019 amid widespread protests. Given the legislation’s bipartisan cosponsorship, passage seems reasonably likely. 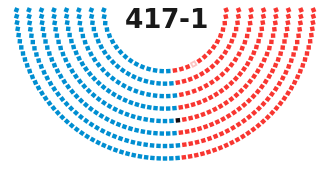