This was a vote to pass H.R. 2548 (116th) in the House. This vote was taken under a House procedure called “suspension of the rules” which is typically used to pass non-controversial bills. Votes under suspension require a 2/3rds majority. A failed vote under suspension can be taken again.

Should a state or municipality have to wait for the federal government to approve their application for a post-recovery construction or infrastructure project before they can proceed?

A state or locality applying for federal dollars for a construction or recovery project following a natural disaster must wait for an official ‘yes’ or ‘no’ from the Federal Emergency Management Agency (FEMA) before they can begin construction or buy the needed land.

These replies are often slow to arrive, even when time is of the essence.

The Hazard Eligibility and Local Projects (HELP) Act is a bipartisan bill that would allow more post-recovery projects to go ahead before receiving federal approval, as long as the project “complies with all other eligibility requirements of the hazard mitigation assistance program.”

Supporters argue the bill would better help local areas make quick rebounds after events such as hurricanes, floods, and tornadoes.

“In Houston, our local agencies and officials tasked with flood mitigation and prevention have told me that this law is a real impediment to getting started on long-term recovery and mitigation projects,” Rep. Fletcher said in a press release. “Our community is ready to move forward, and… this common-sense change to the law [will] help our communities recover as quickly as possible.”

“After a storm like Hurricane Harvey, folks want to start picking up the pieces, repairing roads, infrastructure and homes as soon as possible,” cosponsor Rep. Pete Olson (R-TX22) also said. “No one should be forced to live in potentially unsafe conditions while they wait for recovery funds that can easily take months, if not years….The federal government should not be an obstacle if local funds are available to start construction on crucial projects.”

GovTrack Insider was unable to locate any explicit statements of opposition, but the Republicans who voted no were members of the House Freedom or House Liberty Caucuses, which tend to include deficit hawks.

The Congressional Budget Office estimated the bill would increase the deficit by $17 million over the next decade. That’s something, but an extremely small amount equal to the debt the country currently racks up approximately every six minutes.

The bill passed the House on December 17, by a 409–7 vote. The seven opposing votes were from six Republicans and Republican-turned-independent Rep. Justin Amash (R-MI3).

It next goes to a potential Senate vote, where passage seems likely if a vote is held. 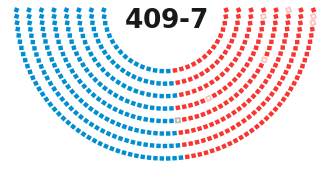