42 percent of women veterans report finding childcare as “very hard” or “somewhat hard,” according to a 2015 Department of Veterans Affairs study. 62 percent said they would find on-site childcare at VA-run medical centers to be “very helpful.”

This barrier prevents some veterans from accessing their medical appointments — a particularly salient issue when an average of 20 veterans commit suicide per day.

A 2011 pilot program created by Congress tested providing free childcare at a select number of VA sites, with over 10,000 children using it to date. The program was supposed to be temporary but has been reauthorized four times, with the current reauthorization scheduled to expire in October.

The Veterans’ Access to Child Care Act would do what its name implies on a permanent level: _permanently _provide childcare services to veterans while receiving receiving health care services at a VA facility.

That can include either on-site childcare, or a stipend or direct payment for private childcare. The bill would only apply to childcare offered during the time the parent or caregiver is receiving or accessing VA healthcare, and not at any other time.

It was introduced on January 29 as bill number H.R. 840, by Rep. Julia Brownley (D-CA26), the Chair of House Veterans’ Affairs Health Subcommittee.

Supporters argue the bill makes permanent a program which has already worked on a temporary level, and helps female veterans who otherwise might face more barriers than their male counterparts.

“The lack of affordable and convenient child care should never be a barrier for veterans trying to access the VA healthcare they’ve earned and deserve,” Rep. Brownley said in a press release. “This is especially important for the growing population of women veterans, who are more often taking care of young children. I look forward to continuing to work with… all of our colleagues to see this important program finally become permanent and nationwide.”

The bill passed the House on February 8 by a 400–9 vote. Every Democrat voted in favor, as did almost every Republican except nine.

Interestingly, even though most House Republicans ended up supporting the legislation, all 22 original cosponsors were Democrats, usually more typical of highly partisan legislation.

A previous version also introduced by Rep. Brownley similarly passed the House by voice vote in July 2017, but never received a vote in the Senate. It’s possible the same fate could befall the legislation this time around too.

None of the nine opponents spoke up to offer their reasoning during House floor debate on the legislation. However, those nine are known for being among the biggest Republican spending hawks in Congress, and the Congressional Budget Office estimated the bill would cost $96 million over its first five years. 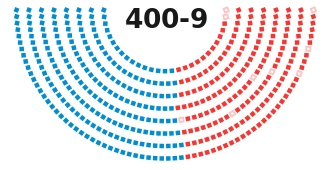