This was a vote to pass H.R. 1079 (116th) in the House. This vote was taken under a House procedure called “suspension of the rules” which is typically used to pass non-controversial bills. Votes under suspension require a 2/3rds majority. A failed vote under suspension can be taken again.

Currently, you have to mail or fax a physical letter for some actions undertaken by congressional offices. The CASES for Constituents Act would finally allow digital alternatives in addition.

For 44 years and counting, the Privacy Act of 1974 has mandated that members of Congress get written authorization from a constituent before undertaking case work with the federal government on the constituent’s behalf. That can even include for emergency situations such as with FEMA, the VA, Social Security, or Medicare.

“After our 2016 flood in South Louisiana, our office was available to field the thousands of calls from flood victims in need of help,” Rep. Garret Graves (R-LA6) said. “How do you tell someone who literally just lost everything — including their printers — that the law requires them to print and fax, scan, or mail in a sheet of paper authorizing us to speak to FEMA or any other agency before we could do anything? It was absurd.”

The Creating Advanced Streamlined Electronic Services (CASES) for Constituents Act would allow a digital or internet option for all Americans to authorize their congressman’s office to conduct casework with any government agency.

Supporters argue the bill brings an archaic aspect of the federal government to an end.

“Let’s be honest, we’re not splitting atoms or reinventing the wheel here; everybody knows we’re a long way from government being able to keep up with the private sector when it comes to innovation, customer-focus or speed,” Rep. Graves said in a press release. “But this bill helps to solve the problem.”

“More than 80% of American adults have smartphones and nearly all of them use the internet,” Rep. Graves continued. “There’s just no excuse for the fact that it’s business-as-usual since 1974 for the federal government.”

GovTrack Insider was unable to locate any statements of opposition.

The bill passed the House on February 11 by a unanimous 379–0 vote.

A previous version also introduced by Rep. Graves passed the House in July 2018 on a voice vote, but never received a vote in the Senate. It’s possible the same fate could befall the bill this time around as well. 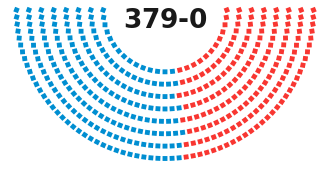