S. 1: Strengthening America’s Security in the Middle East Act of 2019

What was the first legislation that Senate Republicans introduced this year?

The very first bill introduced by a majority party in Congress sends an important message about what their legislative priorities are.

In the previous Congress, House Republicans’ first bill was the Tax Cuts and Jobs Act which lowered personal income and corporate tax rates, although ballooning the national deficit in the process.

So, what is current Senate Republicans’ first bill?

The Strengthening America’s Security in the Middle East Act would institute several measures related to that region, including:

At least 26 states have passed laws banning their contractors from boycotting Israel. This includes blue states like California and New York, red states like Texas and Alabama, and all six swing states that flipped from Obama in 2012 to Trump in 2016.

Supporters argue that the U.S. needs to take several bold actions to further help our friends and punish our enemies in one of the planet’s most volatile geopolitical regions.

“It is in America’s national security interests to ensure that our allies in the Middle East like Israel and Jordan remain secure amid the region’s growing destabilizing threats posed by Iran and Syria’s Assad regime,” Sen. Rubio said in a press release. “This important bill will also impose new sanctions against the Assad regime and its supporters who continue to commit horrific human rights violations against the Syrian people.”

Opponents counter that the bill’s provisions helping protect state and local governments that punish Israel boycotters is a freedom of speech violation.

“In the midst of a partial government shutdown, Democratic and Republican senators have decided that one of their first orders of business next week should be to sneak through a bill that would weaken Americans’ First Amendment protections,” ACLU Senior Legislative Counsel Kathleen Ruane told The Intercept.

“The bill… encourages states to adopt the very same anti-boycott laws that two federal courts blocked on First Amendment grounds. The legislation, like the unconstitutional state anti-boycott laws it condones, sends a message to Americans that they will be penalized if they dare to disagree with their government.”

The bill received more approval than disapproval votes in its first vote, 56–44, but that wasn’t enough to surpass the 60-vote threshold needed to advance.

However, it’s possible the bill could pass the Senate in a future vote. Some Democrats — even ones who may have otherwise supported the legislation — didn’t back it right now by arguing that no other legislation should move until the partial government shutdown is ended.
Unlike House Republicans’ tax cut reform of 2017 or House Democrats’ public financing of 2019, which were clearly meant as party priorities that few if any members across the aisle would support, this bill actually has some level of bipartisan support.

The current version so far only has three cosponsors, all Republicans. (Although it’s only been a few days — 30 of the 48 cosponsors for the previous version signed on after its introduction day.) 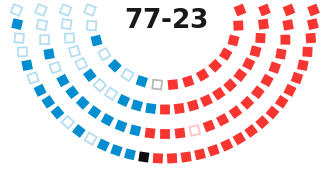