Motion to Invoke Cloture Re: Motion to Proceed to S. Res. 50

This was the first in what is expected to be a series of votes on a bill to shorten the time the Senate may debate most presidential nominees. Although this resolution was filibustered after failing to reach the necessary 3/5ths majority, it is expected that the Senate may change its rules to require a simple majority and vote again. This was the procedure used to confirm the nomination of Justice Neil Gorsuch two years ago.

Read our summary of S.Res.50 below:

How much time should the Senate have to debate most presidential nominees: 30 hours, or only two hours?

The Senate has to approve about 1,200 to 1,400 executive branch appointments made by the president. These range from prominent ones like Attorney General and Secretary of Defense, to 1,000+ lower-level positions which nonetheless play an important behind-the-scenes role in crafting federal policy.

Currently, each nominee is allowed up to 30 hours of debate on the Senate floor, an amount of time frequently maximized in recent years by senators opposing a president’s nominations.

Senate Resolution 50 would shorten that debate time from 30 hours to only two hours for the vast majority of presidential nominees. The exceptions would be for Supreme Court nominees, circuit court nominees, and Cabinet-level officials.

The resolution was introduced on February 6 by Sen. James Lankford (R-OK).

Supporters argue that the Senate’s advice and consent role has in recent years been drawn out, elongated, and pushed to a breaking point far beyond what should be permitted.

“In the last two years, the confirmation process has been mired in unprecedented political stall tactics,” Sen. Lankford said in a press release. “The Senate nomination process needs to function efficiently again. Presidents, regardless of their party, should be able to pick their staff.”

“It’s the Senate’s role to ensure nominees are capable and qualified; we have a responsibility to provide advice and consent,” Sen. Lankford continued. Needless obstruction of that process is a failure of our duty.”

“This resolution would permanently reduce post-cloture debate time for most nominations and allow the Senate to fulfill a primary constitutional duty of advice and consent. It is time to update the Senate rules so the nomination process can function appropriately again.”

Opponents counter that the move is a pure partisan ploy by Senate Republicans to speed up Trump nominees, ignoring the Senate’s coequal role in debating and discussing the nominees.

The move “will remove important checks and balances from the nomination process, making it harder to properly vet but easier to confirm unqualified nominees,” said Sen. Amy Klobuchar (D-MN), top Democrat on the Senate Rules Committee.

“At a time of blistering rhetoric, anger, and divisiveness, this is no time to cede this chamber’s ability to do its due diligence by removing the guardrails that help ensure judicial nominees have the qualifications for lifetime appointments to the federal bench,” Klobuchar continued.

“The Senate’s constitutional duty of advise and consent is too important to turn into a mere rubber stamp.”

The resolution was approved by the Senate Rules Committee on February 13 by a 10–9 vote that split along party lines.

The measure now proceeds to the full Senate, where Sen. Lamar Alexander (R-TN) told Politico it should likely pass by end of March. If it does, it won’t need approval from the Democrat-controlled House, since it’s an internal Senate measure only applying to that chamber.

Of course, this move could come back to bite Senate Republicans in the future, if it passes and Democrats take advantage of the streamlines rules to more easily pass left-leaning judges and executive branch officials.

This vote was related to a resolution introduced by Sen. James Lankford [R-OK] on February 6, 2019, S.Res. 50: A resolution improving procedures for the consideration of nominations in the Senate..

Cloture on the Motion to Proceed Rejected. 3/5 Required. Source: senate.gov.

The Yea votes represented 47% of the country’s population by apportioning each state’s population to its voting senators. 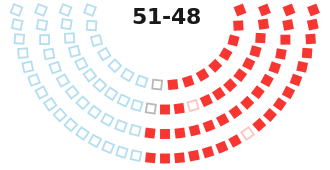