But would provisions allowing consumers to challenge their credit score open the door to the removal of negative but accurate information?

There are three nationwide credit reporting agencies: Equifax, Experian, and TransUnion. These three for-profit companies calculate your credit score based on your personal finances and payment history. That credit score in turn can affect your ability to rent a house or apartment, buy a car, purchase insurance, or take out a credit card.

But all three companies use different formulas for determining your credit score, have different websites for obtaining your own score, and often charge customers to find out what their score is.

The Protecting Your Credit Score Act would direct the three credit bureaus to create a central online website, which would allow a person to check their credit score for free at any time.

The bill would also require the agencies reveal which other organizations or people they’ve sold your credit score or data to in the past two years — potentially including banks, credit card companies, car dealers, employers, landlords, and insurance companies.

Lastly, it aims to streamline the process for a consumer to challenge perceived inaccuracies in their credit score. That includes allowing courts to award injunctive relief, a move in which they demand a defendant — in this case one of the three credit bureaus — to cease a certain action.

Supporters argue the bill helps consumers better understand how their critical credit score is being calculated, and who it’s being sold to.

“There are three companies in the United States that literally hold the keys to deciding Americans’ credit fates, on whether you should get access to credit — what you pay for a car, whether you can get a mortgage for a house, the rates on a credit card, and how much you can receive for a small business loan,” Rep. Gottheimer said in a press release.

“Each of these credit bureaus come up with their own magic number: your credit score,” Rep. Gottheimer continued. “They have their own secret formula, and it’s up to you to track it, beg them to fix inaccuracies when they arise, and deal with data breaches when they occur, far too often.”

“[The bill] sets up a one-stop shop, online portal to check your credit report, for free, at any time,” Rep. Gottheimer explained. “It allows victims to shut off the ability of credit hucksters from using your information to apply for credit under your name.”

Opponents counter that the legislation could open the door for lawsuits that result in the potential removal of damaging but valid financial information.

“We are concerned about the increasing abuse of these protective provisions to remove accurate but negative information,” the American Banking Association’s James C. Ballentine wrote to Congress, “not only by credit repair organizations and those hoping to erase accurate negative information from their report to improve their ability to obtain credit, but also by individuals, including those involved in organized crime, seeking to defraud lenders.”

“We believe [the bill] will enhance the ability of these individuals to flood consumer reporting agencies and furnishers of information with false claims of inaccuracies that must be resolved in a timely fashion or deleted,” Ballentine continued. “Other provisions promote false claims and impose new burdens that will overwhelm consumer reporting agencies or furnishers, leading to the inappropriate deletion of accurate information.”

The bill has attracted one Republican cosponsor across the aisle: Rep. Tom Reed (R-NY23). The House Financial Services Committee approved it on December 11, by a vote of 31 to 24.

It now awaits a potential vote in the full House. Odds of passage are low in the Republican-controlled Senate. 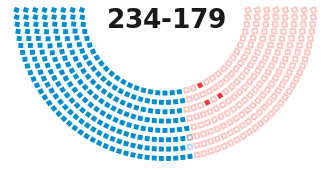