H.Res. 1155: Reaffirming the House of Representatives’ commitment to the orderly and peaceful transfer of power called for in the Constitution of the United States, and for other purposes.

This was a vote to agree to H.Res. 1155 (116th) in the House. This vote was taken under a House procedure called “suspension of the rules” which is typically used to pass non-controversial bills. Votes under suspension require a 2/3rds majority. A failed vote under suspension can be taken again.

The overwhelming majority of Republicans supported the resolution, but not all of them.

President Donald Trump has claimed that he might refuse to leave office if he loses the 2020 presidential election. During a September 23 press conference, in response to a question about whether he would commit to a peaceful transfer of power, Trump responded, “Well, we’re going to have to see what happens.”

Whether he would actually follow through or was just blustering is unclear at this point. But within days of Trump’s answer, a House and Senate resolution were introduced to get members of Congress on the record, pre-election, about whether they would endorse a peaceful transfer of power in event of a Trump loss.

What the resolutions do

Both resolutions declare that the House or Senate, respectively, “reaffirms its commitment to the orderly and peaceful transfer of power called for in the Constitution of the United States” and “intends that there should be no disruptions by the President or any person in power to overturn the will of the people of the United States.”

Supporters argue that a peaceful transfer of power is one of the hallmarks of the American system, where so far there has never been a president who refused to leave office.

“Since the dawn of our nation, every President has honored the orderly and peaceful transfer of power to his successor following an election, but President Trump repeatedly has said he might not allow this,” Rep. Swalwell said in a press release. “His threat to refuse to accept defeat should worry every American regardless of party. With this resolution, the House will express its commitment to democracy and its intent that nobody can subvert the will of the people of the United States.”

“We have come through a lot in our country, and we continue to be challenged. But I believe to have the leader of the free world talk as if we are an autocracy, authoritarian versus a democracy, is something that alarmed me and alarmed a lot of my colleagues on both sides of the aisle,” Sen. Manchin said on the Senate floor. “This is not who we are, and we must speak loudly. This is not politics. This is not Republican or Democrat. Make no mistake. This is basically if you believe, for the sake of the good Lord and all we believe in and our country, this is about maintaining this democracy.”

While it’s true that the FBI under Obama’s presidency specifically surveilled former Trump campaign adviser Carter Page because they suspected he was colluding with Russian operatives, it’s false to say that they spied on “Trump’s campaign” in totality. Nor is there any evidence that Obama himself personally ordered or was personally involved in the investigation. Even the next FBI director Christopher Wray, who Trump himself appointed, said both the investigation and surveillance had been completely legal.

The Senate vote passed on September 24 by unanimous consent, a procedural move used for relatively noncontroversial votes with little or no opposition.

“I agree… that a peaceful transfer of power is imperative when a sitting president loses reelection in a fair race,” Rep. Gohmert said in a statement. “However, I voted ‘no’ on the House Democrats’ resolution because it singles out President Donald Trump demanding ‘no disruptions’ and irresponsibly fails to mention the need for the Democrat candidate to also accept the results of a fair election as well.” 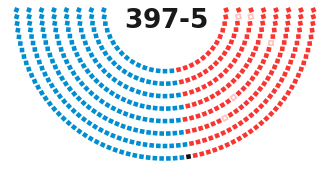