This was a vote to pass H.R. 2382 (116th) in the House. This vote was taken under a House procedure called “suspension of the rules” which is typically used to pass non-controversial bills. Votes under suspension require a 2/3rds majority. A failed vote under suspension can be taken again.

Only one federal agency is required to pre-fund their employees’ future retirement healthcare benefits, which costs taxpayers billions more upfront than at any other agency.

At its current rate of financial loss, the U.S. Postal Service is slated to run out of money in 2024. The Trump Administration’s budget proposal warned that — absent any changes — the USPS might soon need a taxpayer funded bailout.

Why? There are several hundred federal agencies, but only one is mandated to pre-fund its employees future healthcare benefits: the Postal Service.

This wasn’t always the case. The mandate only began starting with the Postal Accountability and Enhancement Act of 2006. It passed both the Senate and House by voice votes, procedures used for noncontroversial votes in which no record of individual members’ votes is made.

However, that provision has become much more controversial in the years since.

The USPS Fairness Act would eliminate the pre-funding requirement. Advocates claim that it could single-handedly put the Postal Service out of the red and into the black.

Supporters argue the bill makes financial sense, puts the Postal Service on an even footing with literally every other federal agency, and helps ensure the solvency of one the programs that most directly affects ordinary Americans.

“The USPS is a critical resource for Southwest Oregon, especially our rural communities,” Rep. DeFazio said in a press release. “The pre-funding mandate has not only prevented USPS from investing in services, technology and products, but it has also threatened core services that Oregonians rely on, including door-to-door delivery and six-day delivery. This legislation will not only end USPS’s financial crisis but will allow the agency to invest in critical improvements, all while maintaining its commitments to retirees’ health benefits.”

GovTrack Insider was unable to locate any explicit statements of opposition, but the main sources of opposition are the Postal Service’s private sector competitors who would rather keep their opposition behind the scenes.

2006’s pre-funding requirement put the U.S. Postal Service at a staggering competitive disadvantage with the likes of FedEx and UPS. And the Postal Service is banned from lobbying Congress — unlike their private sector competitors.

“It’s also significant that lots of companies benefit from a burden that makes the USPS less competitive,” _Bloomberg _opinion columnist Barry Ritholtz wrote. “These same companies might also would benefit from full USPS privatization, a goal that has been pushed by several conservative think tanks for years.”

“Paying retiree obligations isn’t the issue here; rather, being singled out as the only company with a congressional requirement to fully fund those obligations is,” Ritholtz continued. “It puts the USPS at a huge competitive disadvantage.”

The bill has attracted 29 bipartisan House cosponsors: 23 Democrats and six Republicans. It awaits a potential vote in the House Oversight and Reform Committee.

But as mentioned above, industry’s lobbying to mandate the status quo would likely be strong. FedEx spent $10.1 million on lobbying last year, while UPS spent $9.3 million. 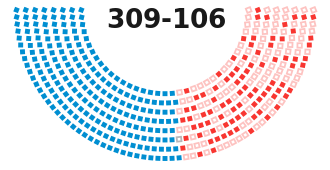