S.Amdt. 1788 (Sanders) to S. 4049: To reduce the bloated Pentagon budget by 10 percent and invest that money in jobs, education, health care, and housing in communities in the United States in which the poverty rate is not less than 25 percent.

This was a vote to approve or reject amendment S.Amdt. 1788 (116th) (Bernard “Bernie” Sanders) to S. 4049 (116th). The title of the amendment is S.Amdt. 1788 (Sanders) to S. 4049: To reduce the bloated Pentagon budget by 10 percent and invest that money in jobs, education, health care, and housing in communities in the United States in which the poverty rate is not less than 25 percent..

The Nay votes represented 77% of the country’s population by apportioning each state’s population to its voting senators. 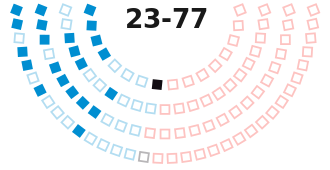