The president couldn’t even discriminate against the Church of the Flying Spaghetti Monster.

Trump’s travel ban was popularly nicknamed “the Muslim ban” by its Democratic critics since most of the countries it applied to were majority Muslim, and because Trump as a 2016 candidate had indeed proposed a Muslim ban. However, the final policy itself wasn’t actually a ban on Muslims themselves from setting foot in the U.S. Regardless, President Joe Biden rescinded the policy on his first day in office.

Currently, federal law bans any person from being discriminated against — or, vice versa, receiving preferential treatment — when entering the U.S. on the basis of five characteristics: race, sex, nationality, place of birth, or place of residence.

The NO BAN (National Origin-Based Antidiscrimination for Nonimmigrants) Act would add another category: religion. This would eliminate the president’s ability to restrict a class of entrants from the U.S. based on their religion — or, vice versa, to give a certain religion preferential treatment.

Again, it’s unclear that this would have actually stopped an executive order such as Trump’s, since it wasn’t *explicitly *a ban on Muslims.

Supporters argue that the legislation would be in keeping with America’s pluralistic values — indeed, the Pilgrims came to Plymouth back in 1620 primarily for purposes of religious freedom.

“The Muslim ban was a hateful stain on our nation. Inspired only by bigotry and not any genuine national security concerns, the ban served only to separate families while stoking bigotry, xenophobia, and Islamophobia,” Rep. Chu said in a press release. “We cannot risk letting prejudice become policy again. By requiring actual evidence of a threat before there can be any such broad-based bans like this, the [legislation] ensures that future presidents will not be able to ban people solely because of their religion.”

“The Muslim ban senselessly upended lives — separating thousands of Americans from their families and stripping fundamental protections from those with every right to be in the United States,” Sen. Coons said in a separate press release. “We’ve turned the page on this hateful policy, but we must ensure that no president can ever again act through fear and prejudice to discriminate based on religion or nationality. The [legislation would] establish new guardrails to ensure our immigration policies are rooted in our values, not in fear.”

Opponents counter that the legislation poses a threat to national security.

“President Trump invoked this authority against countries that were hotbeds of international terrorism and that were not cooperating with the United States in providing basic information about travelers coming from these countries. The left called it a ‘Muslim ban.’ What nonsense,” Rep. Tom McClintock (R-CA4) said on the House floor. “His orders affected only a tiny fraction of Muslim majority countries and a sizeable number of non-Muslim countries. The Supreme Court acknowledged this obvious truth when it upheld the president’s actions.”

“Without this authority, the president would have been powerless to take simple, prudent precautions against terrorists and criminals from entering the United States,” Rep. McClintock continued. “The president’s ability to protect against threats, negotiate security protocols and when necessary to retaliate against discriminatory actions by other countries depends on having this power at his immediate disposal.”

Rep. Chu’s prior House version attracted 219 cosponsors, all Democrats. It was folded into a larger bill called the FUTURE Act, which the Democratic-led House passed in July 2020 on a nearly party-line vote, though it never received a vote in the Republican-led Senate.

The current House version attracted a smaller — but still large — 159 cosponsors, all Democrats. The chamber passed it on April 21 on a 218–208 party-line vote, with Democrats unanimously in favor and Republicans almost unanimously opposed, with only Rep. Brian Fitzpatrick (R-PA1) crossing party lines.

The Senate version has attracted 40 cosponsors: 38 Democrats and two independents. As of 2021, Democrats now control the chamber. 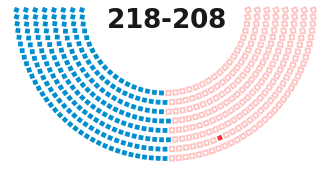