This was a vote to pass H.R. 1693 in the House. This vote was taken under a House procedure called “suspension of the rules” which is typically used to pass non-controversial bills. Votes under suspension require a 2/3rds majority. A failed vote under suspension can be taken again.

Cocaine is federally classified as a Schedule II drug, the category with the second-highest potential for dependence and abuse, alongside the likes of Vicodin, Adderall, and meth.

The Anti-Drug Abuse Act of 1986 created a 100:1 ratio for sentencing people who were caught with crack cocaine versus powder cocaine. According to the U.S. National Library of Medicine, black people are more likely to use crack cocaine, so the law had a disproportionate effect on nonwhites.

The law was partially crafted and advocated by then-Sen. Joe Biden, though he has subsequently walked back his support. “We were told by the experts that ‘crack, you never go back,’ that the two were somehow fundamentally different. It’s not,” Biden said in 2019. “But it’s trapped an entire generation.”

The Fair Sentencing Act of 2010 reduced the crack/powder sentencing disparity from 100:1 to 18:1.

The EQUAL (Eliminating a Quantifiably Unjust Application of the Law) Act would eliminate the sentencing disparity between crack and powder cocaine entirely.

Supporters argue that since the two types of cocaine are essentially the same except for texture, the sentencing requirements should not divulge so greatly — or at all.

“Crack cocaine has historically been used in inner-city communities and powder cocaine in affluent neighborhoods and the suburbs. Put simply, the dividing line is race and geography,” Rep. Jeffries continued. “That does not justify the wide disparity in sentencing.”

Opponents counter that the disparity was instituted for a reason: that the effects of crack versus powder cocaine are quite different in practice, in a way that arguably makes the sentencing actually a blessing in disguise for the black community.

“The statistics are quite clear concerning the effects of crack cocaine, and crime generally, on predominantly black communities,” Cristian M. Stevens wrote in a 1997 Missouri Law Review article. “For example, in 1994, 74 percent of emergency room admissions for crack-related problems involved blacks. Furthermore, blacks compose 69 percent of admissions for treatment for crack abuse, whereas whites account for only 24 percent.”

“In light of such figures,” Stevens asked, “why are not increased sentences for crack looked upon as a benevolent measure designed to protect black communities from those who would distribute crack to the poor and the children of the community?”

The House bill has attracted 12 bipartisan cosponsors: eight Republicans and four Democrats. It awaits a potential vote in either the House Judiciary or Energy and Commerce Committee.

The Senate version has attracted one Democratic cosponsor. It awaits a potential vote in the Senate Judiciary Committee. 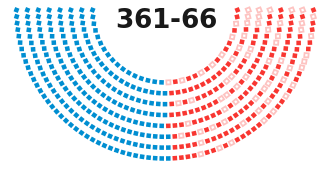