S.Amdt. 3115 (Ernst) to S.Con.Res. 14: To establish a deficit-neutral reserve fund relating to prohibiting or limiting the issuance of costly Clean Air Act permit requirements on farmers and ranchers in the United States or the imposition of new Federal

This was a vote to approve or reject amendment S.Amdt. 3115 (Joni Ernst) to S.Con.Res. 14. The title of the amendment is S.Amdt. 3115 (Ernst) to S.Con.Res. 14: To establish a deficit-neutral reserve fund relating to prohibiting or limiting the issuance of costly Clean Air Act permit requirements on farmers and ranchers in the United States or the imposition of new Federal .

The Yea votes represented 58% of the country’s population by apportioning each state’s population to its voting senators. 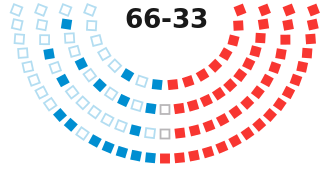