H.R. 335: To provide for an exception to a limitation against appointment of persons as Secretary of Defense within seven years of relief from active duty as a regular commissioned officer of the Armed Forces.

This was a vote to waive the seven-year waiting period for former military to serve in the civilian position of Defense Secretary. Nominee Lloyd Austin retired in 2016. The waiver required at least 60 votes because, when bringing it to the floor for consideration, the majority leader asked for and was granted unanimous consent to immediately consider the waiver without intervening steps like cloture in exchange for a higher threshold for passage (usually it would only take a simple majority).

This vote was related to a bill introduced by Rep. Adam Smith [D-WA9] on January 15, 2021, H.R. 335: To provide for an exception to a limitation against appointment of persons as Secretary of Defense within seven years of relief from active duty as a regular commissioned officer of the Armed Forces.. 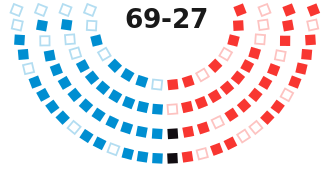