This was a vote to pass H.R. 1621 in the House. This vote was taken under a House procedure called “suspension of the rules” which is typically used to pass non-controversial bills. Votes under suspension require a 2/3rds majority. A failed vote under suspension can be taken again.

Should your jail time be increased if a judge believes you probably committed another crime in addition, but were found not guilty?

In 2005, Antwuan Ball was one of 18 members of the Washington D.C. gang Congress Park Crew arrested on drug charges. While Ball was convicted on the charge of cocaine distribution, he was acquitted of cocaine conspiracy.

Yet at Ball’s sentencing, District Judge Richard Roberts found that even though the evidence for the conspiracy charge may have fallen short of the legal standard of “beyond a reasonable doubt,” there was clearly a preponderance of evidence nonetheless. He cited testimony from fellow witnesses, including “What [Ball] says goes’” and “‘If something was going down, they would go to Antwuan. He was in charge.”

As a result, Judge Roberts sentenced Ball to 15 years in prison, far more than sentencing guidelines recommend he should have gotten for the distribution conviction alone, but still less than the statutory maximum. The D.C. Circuit Court upheld the sentence upon appeal, and the Supreme Court in 2014 turned down the case, although three justices from across the ideological spectrum — Antonin Scalia, Clarence Thomas, and Ruth Bader Ginsburg — dissented.

The Prohibiting Punishment of Acquitted Conduct Act would prevent any court from considering a defendant’s acquitted behavior or charge at a sentencing, unless it’s to lessen that person’s sentence for a convicted charge.

Supporters argue that the punishment should fit the crime — that is, the crime for which they’re explicitly being sentenced.

“Under our Constitution, defendants can only be convicted of a crime if a jury of their peers finds they are guilty beyond a reasonable doubt. However, federal law inexplicably allows judges to override a jury verdict of ‘not guilty’ by sentencing defendants for acquitted conduct. This practice is inconsistent with the Constitution’s guarantees of due process and the right to a jury trial,” Sen. Durbin said in a press release. “Our bipartisan, bicameral bill would make it clear that this unjust practice is prohibited under federal law.”

“It’s not just a matter of basic fairness, it’s also about upholding the Constitutional guarantee of due process. Criminal sentences should be based on crimes of which the defendant was convicted,” Rep. Cohen said in a separate press release. “I’m pleased to join… this effort to protect the rights of all Americans by clarifying that judges cannot rely on conduct that wasn’t proven beyond a reasonable doubt when determining sentences.”

Opponents counter that a preponderance of the evidence can still be used when a judge determines a defendant’s sentence, so long as that sentence does not exceed the statutory maximum.

Judge Roberts noted that his sentence for Ball was actually below what it could have been, even if it had still been increased as a result of the acquitted conduct.

Introduced by a Democrat, the House version has attracted one cosponsor, a Republican. It awaits a potential vote in the House Judiciary Committee.

The Senate version has attracted five bipartisan cosponsors: three Republicans and two Democrats. It awaits a potential vote in the Senate Judiciary Committee. Sen. Durbin’s prior 2019 version attracted an identical number of cosponsors, but never received a vote. 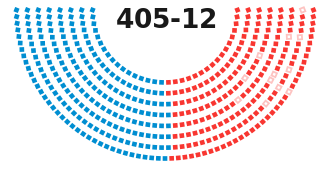